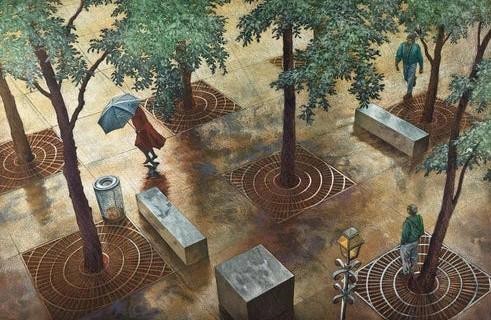 Art Werger was born in Ridgewood, New Jersey in 1955. He received a Bachelor of Fine Arts from the Rhode Island School of Design in 1978 and a Master of Fine Arts degree from the University of Wisconsin in 1982. From 1982 to 2000 Werger was a Professor of Art at Wesleyan College in Macon, Georgia. Since 2000 he has been the Director of Foundations and Professor of Printmaking at Ohio University in Athens, Ohio. 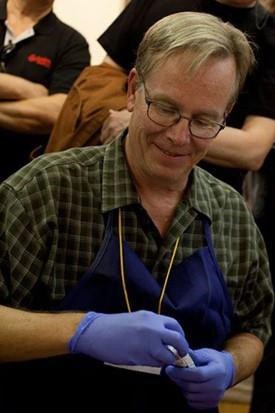 Werger’s impressive, intense prints invite audiences to assume new perspectives and consider the unfolding scene as though they were casual bystanders. He encourages viewers to develop their own interpretations of the action. Werger thrives on dealing with the technical complexities of print media. He most often uses mezzotint, a type of intaglio printmaking where the artist works from dark to light. Werger carefully refines his images to reflect the precision of this process. Werger describes his work, “Through the media of etching and mezzotint, the images I create place the viewer in an active relationship with the subject through various forms of engagement, which are evolved from art historical, cinematic and graphic conventions. My subjects are generally depicted in a realistic manner but are often observed from unusual angles or overlaid with additional clues. These aerial vantage points, or overlapping layers of reality, create a supercharged engagement, presenting imagery in a visual equivalent of a story told by an omniscient narrator in a work of fiction.”

Art Werger’s prints have received many awards and been displayed in numerous international and national exhibitions. They are included in corporate and museum collections such as the Corcoran Gallery of Art in Washington, D.C., Boston Public Library, Brooklyn Museum, Philadelphia Museum of Art, and Museum of Fine Arts in Boston.