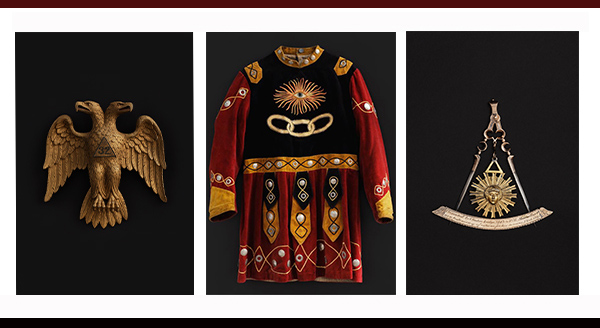 Mystical, evocative, and sometimes simply strange, the art of  fraternal practice is rich in symbols that are oddly familiar yet strikingly uncommon. Through arcane and alluring artifacts, Mystery  and Benevolence brings to light the histories of the Freemasons and the  Independent Order of the Odd Fellows, two fraternal secret societies  with deep roots in American history. The over eighty carvings, textiles,  sculptures, and adornments that constitute this exhibition were used  from the late eighteenth through mid-twentieth centuries, and retain  their clandestine allure to this day.

Whether regarded as “secret societies” or “societies with secrets,”  American fraternal groups arouse endless curiosity about their  ceremonies, ritualized performances, and recitations. These  practices, many borrowed and adapted from ancient Egypt and  biblical Christianity, are kept hidden from outsiders, and lend an  aura of exclusivity and brotherhood to its members. The “mystery and  privilege” of these brotherhoods are also transmitted through secret  systems of hand grips, gestures, and passwords that are thought to  originate in the Middle Ages. Cryptic symbols, hieroglyphs, rituals,  and vows of secrecy cloak fraternal orders in an opaque otherness  that separates them from society while also binding their members in  a system of shared belief. 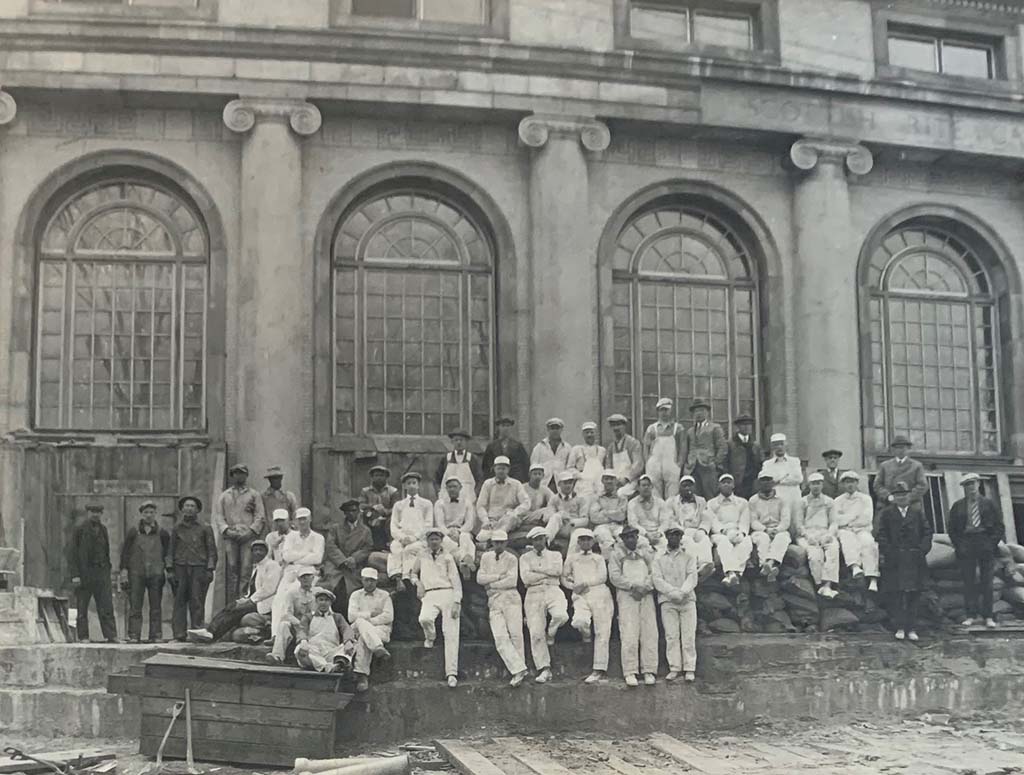 “Fraternity of Brothers: Freemasonry in the Valley of New Castle”.

Shortly after the end of World War I, Freemasonry numbered nearly 6000 men in the Valley of New Castle, prompting the first Commander in Chief, Brother John S. Wallace,  to conceive a Masonic Temple large enough to house the growing numbers.  The Milwaukee firms of Mr. R.G. Schmidt and S.M. Seisel, architect and contractor, were hired and construction began in 1924.  When the cornerstone was laid on June 10,1925, thousands of spectators joined the celebration of what was then the largest facility between New York and Chicago.  Interior work continued for another year, and the Scottish Rite Cathedral opened for official use on November 8, 1926.  This exhibition of art and artifacts from the Scottish Rite Cathedral’s private collection pays tribute to the building’s construction and the history of the more than two dozen Masonic groups that continue to meet there today.

The Making of Masonic Monuments

The Origins of Friday the 13th

A unique tour of Masonic History and symbolism held within New Castle’s own Scottish Rite Cathedral. Get a exclusive peek into the Lodge Rooms and Masonic Archives still in use today. Held Thursdays, November 10 – January 18. Reservations required.

Night at the Movies: National Treasure

Bring the whole family to see the 2004 movie, National Treasure staring Nicolas Cage at the Scottish Rite Cathedral Auditorium. Admission is free. Concessions will be available.

About the Movie: Benjamin Franklin Gates (Nicolas Cage), in hot pursuit of a legendary treasure, must steal one of America’s most sacred and guarded documents — the Declaration of Independence!

Guided tours of the exhibits are available at no charge for school groups and clubs. Contact Robert Presnar to schedule your tour of the Hoyt Galleries.

Take your students onaA unique tour of Masonic History and symbolism held within New Castle’s own Scottish Rite Cathedral. Get a exclusive peek into the Lodge Rooms and Masonic Archives still in use today. To schedule at day-time tour, contact Dawn at (724) 654-6683 or info@cathedralnewcastle.com.

Featuring objects from the American Folk Art Museum that reflect American history and culture, this guide is designed to be readily adapted by educators teaching Kindergarten through high school levels. While classroom teachers across the city, state, and nation often teach similar content to their students, each educator has a distinct approach to engaging their learners in the material. In response to this, the museum’s education team has created a guide to borrow from and build on to meet the needs of your specific classroom environment and teaching style.