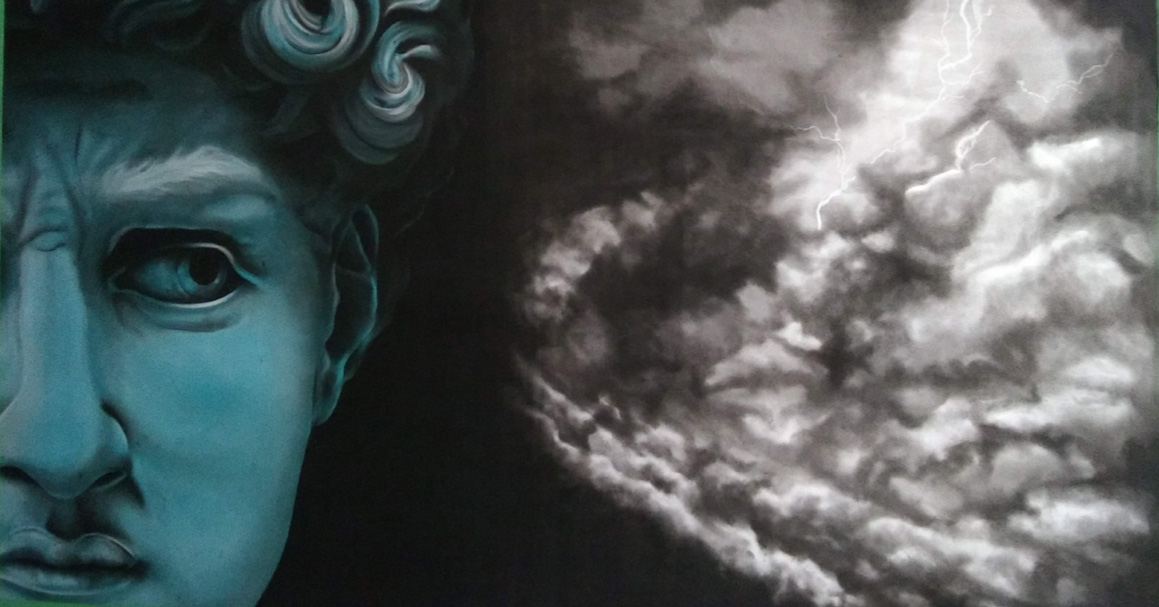 Thirty-five year old survivor Jesse Wolfgang is a largely self-taught artist who learned how to draw portraits and figures by spending thousands of hours studying art books at libraries and his mother’s bookstore while recovering from a violent fall.  It’s an especially compelling story that Arts & Education at the Hoyt is privileged to share through his latest body of work, Memories for My Mother, on display at The Confluence, August 16-September 29, 2022.

It was not an accidental fall but an act of violence that left him with a significant head injury, a damaged spine and broken bones that physically and mentally impaired the young man from completing the simplest of tasks for years.  He was told that he would never walk again, that he would not go back to school, and that he would be dependent on his parents for the rest of his life.

Yet, Jesse found that when he picked up a pencil or a brush that he had no limits.  He was able to freely roam the depths of his mind using paper, canvas, or clay to explore what seemed to be lost in his mind.

“In reality, I was just exploring the new me”, he said, “and it brought peace to my muddled brain.”

When the pain medication prescribed for his broken back became an addiction, art became a tool to help Jesse during withdrawal.    He said, “It not only brought me sobriety, but became a vehicle for spirituality.  When it was difficult to communicate, art blessed me with an outlet through which I was able to connect with others.  Art saved my life.”

Over time, Jesse continued to learn, heal and overcome the resulting physical and mental limitations with the help of a few courses at Edinboro University in Art History, Drawing 1 and 2 and Color Theory.  His growing talents eventually earned Best in Show at the Erie Festival of the Arts Panorama Exhibit in 2012, and led to acceptance into Erie Art Museum’s annual Spring Shows in 2012, 2013, 2014, 2015 and 2018.  Jesse went on to win the Dick Blick Award in the National Art League of New York City’s Juried Art Show in 2019, and exhibited at the Barber National Institute in Erie, PA in 2020.

Jesse’s work is primarily focused on people and nature.  Since his accident, he has drawn about a thousand portraits. At first, drawing was for the sake of peace.  Over time, it became a way for him to connect with God and nature.

“I think it is vital for folks who suffer from closed-head-injuries such as mine to recognize their inner strength and to understand they are still capable of tremendous feats,” he said.  “We are not our injuries or our handicaps.  We are only limited by ourselves.”

A free meet and greet reception is being held at The Confluence on August 19, 5-7 pm.

The Hoyt is proud to host rotating exhibitions featuring local artists at The Confluence, a coffee shop and gather space located in downtown New Castle.