An Evening Of Romantic Violin With Andrew Sords 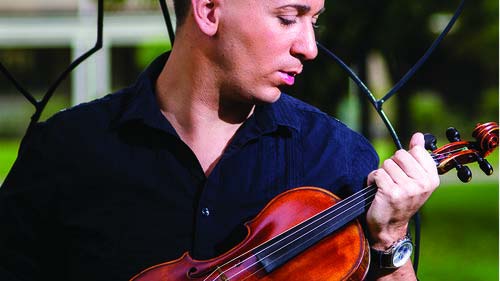 Cleveland’s Andrew Sords is a celebrated violinist who has collaborated with more than 300 orchestras across the globe! He has received numerous awards and distinctions throughout his career, including the 2012 Pittsburgh Concert Society Career Grant and the 2005 National Shirley Valentin Award. In celebration of Beethoven’s 250th Anniversary this year, Sords will tour extensively throughout 2019-20 with the Beethoven sonata and trio cycles, the Triple Concerto and Violin Concerto, and his complete chamber music ensemble. These appearances will include venues of all shapes and sizes in Australia, Mexico, British Columbia, the Caribbean, Yukon Territory, and the United States.

A man of diverse interests and passions, Sords is the only classical musician to havecompeted in Pittsburgh’s Dancing With The Stars. He has performed numerous times for LGBT outreach in collaborations with the Minnesota Philharmonic, the Bay Area Rainbow Symphony, and the Atlanta Philharmonic, and is a popular guest on Sirius XM’s Derek and Romaine Show, NPR’S Morning Edition, and other public media platforms. Sords’s recent collaboration with Sean Christopher on the New-Age album “Transcendence” has been met with commercial and critical success.

Sords will be appearing at the Hoyt with Elizabeth DeMio, piano, to perform the romantic works of Beethoven, Franck, Chopin, and Wieniawski.

An Evening Of Romantic Violin With Andrew Sords