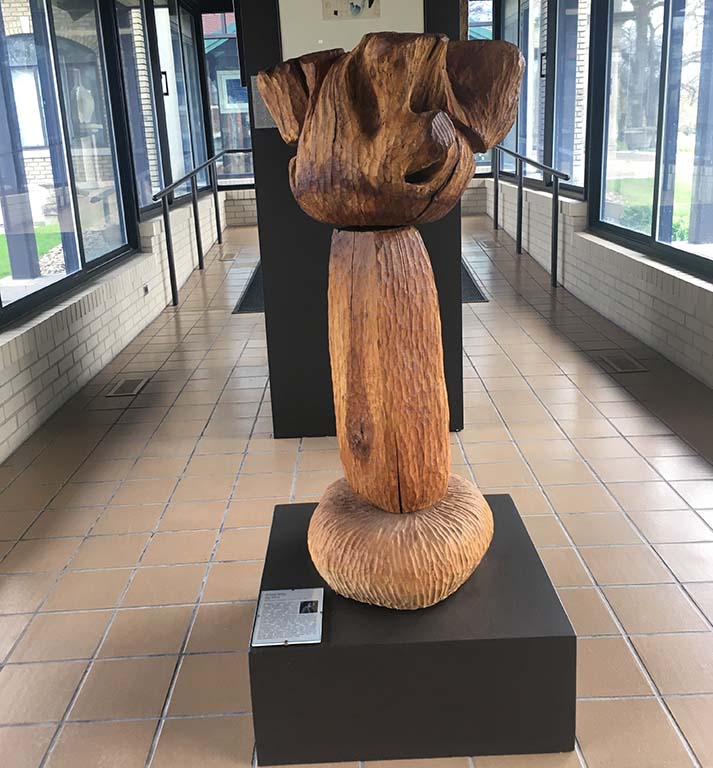 Thaddeus “Thad” Mosley is a self-taught African American sculptor. Earning a living throughout his adult life as a postal worker in Pittsburgh – so that he could support his family by day and work as a sculptor by night– he has evolved an individual and powerful African American voice. He worked alone, patiently developing a sculptural language absolutely his own, yet traceable to his primary sources of inspiration: the vitality of African art and American jazz and two twentieth-century artists. (Excerpted from Thaddeus Mosley: African-American Sculptor by David Lewis; Lonnie Graham; Leon A. Arkus; Sam Gilliam)

A native of New Castle, Pennsylvania, Mosley enlisted in the U.S. Navy, then graduated in 1950 from the University of Pittsburgh, where he majored in English and journalism, then settled in Pittsburgh and took a job with the U.S. Postal Service. Some freelance journalism in the 1950s for the Pittsburgh Courier and various national magazines sparked his interest in carving and sculpture. His solo and two-person exhibits include events at the Carnegie Museum of Art in 1968 and 1997; the Pittsburgh Center for the Arts (PCA)’s Artist of the Year show in 1979; the Three Rivers Arts Festival with Selma Burke in 1990; and the Manchester Craftsmen’s Guild in 1995. His best-known sculptures in Pittsburgh are the 14-foot cedar Phoenix at the corner of Centre Avenue and Dinwiddie in the Hill District and the Mountaintop limestone at the Martin Luther King Jr. Library in the Hill District at Herron and Milwaukee Streets. He also is 1 of 32 artists to be featured in the 2018 Carnegie International.